Discover the ‘killer app’ of conversion that helps you connect with customers and charm them to the checkout.

What You Will Learn

The Power of Storytelling

The tension was crackling in the air, and I was tensed up with excitement. I was going to win, I was sure of it! I had won my way through four levels of speech contest in Bangkok, and was now competing in the final.

If I won, I would be the Public Speaking Champion of South-East Asia. And I was confident that victory was mine. After all, I’d just given the speech of my life – an emotional, personal story delivered like a pro. Who could beat that?

Then the contest chair announced that the winner was…

Instead the contest was won by Ning – a lady who delivered (it seemed to me ) a rather humdrum speech about her cosmetic surgery. How could her speech be the winner? My phone started buzzing with messages from Western friends with the same view.

“You were robbed…the contest was rigged…your speech was easily the best!”

But then I started getting messages from my Thai friends, too. And they had a different perspective:

“Your speech was great. But Ning had a story Asian people could really relate to and empathize with. We all feel the same way…we felt her pain.”

In losing that contest, I learned a great lesson. Storytelling is powerful. But the most powerful story of all is one that resonates with your audience. My speech rang true with people from Western backgrounds. But my audience for this speech was mostly Thai.

Ning had told a story that all Thais could identify with. She had grown up in a culture that values Western looks, and had a ‘nose job’ to try and become more beautiful. But her new Western-style nose failed to bring her happiness, and she eventually had the surgery reversed. Now she has learned to be happy and proud of her Asian appearance.

Ning’s story was essentially unbeatable in Bangkok. She won by tugging at her audience’s heartstrings and echoing the desires and frustrations of her fellow Thais. And I learned a valuable lesson. Stories are a winning formula when it comes to holding attention. But a story that truly resonates is the most unbeatable of all.

As human beings, we are attracted to stories in an extraordinary way. The entire Hollywood movie industry leverages our fascination with stories. Bestselling authors become billionaires because we can’t help but buy their stories in massive quantities.

We’re addicted to soap operas, we binge watch Netflix, and we stay up until the small hours to read ‘just one more chapter’ of the latest hot novel. We gossip with friends about the latest dramas in our lives, and simple, human stories go viral on social media.

There’s no doubt about it. Stories have the power to grab our attention, and that’s what makes them so powerful as a copywriting tool. In today’s busy and frantic world, attention is a valuable commodity. We are bombarded with ads and promotions all day long, and we simply tune out to most of them.

Stories allow us to cut through the noise and get attention. Then when used properly, they help us hold that attention all the way through the sales funnel. And that’s important, because you’ll never sell anything unless your customers make it to the checkout page.

Although all stories have power, emotional stories will always get the best results. We may like to think of ourselves as being logical, rational beings. But the facts tell a different story. We make most decisions based on emotions only. Then we use logic to rationalize that decision and justify the purchase.

A middle-aged man may tell his friends he invested in a red Mustang because classic cars are a good investment. But that’s a lie. He bought the car because it makes him feel like a teenager again – and because it may impress the sexy divorcee next door. We haven’t moved on that much since we battled saber-toothed tigers in caves. Emotions still rule our lives, and marketers who understand this will always come out ahead.

So leverage stories that connect with core emotions. In one way or another, we all want to move away from some kind of pain towards some kind of pleasure. Stories that illustrate how to do this successfully will resonate with your audience and get you more sales than you can handle.

Stories have been used to found great religions, ignite political revolutions and change the world. They have also been used to sell a heck of a lot of stuff. Here are some great examples of storytelling in action in advertising:

1. They Laughed When I Sat Down at the Piano 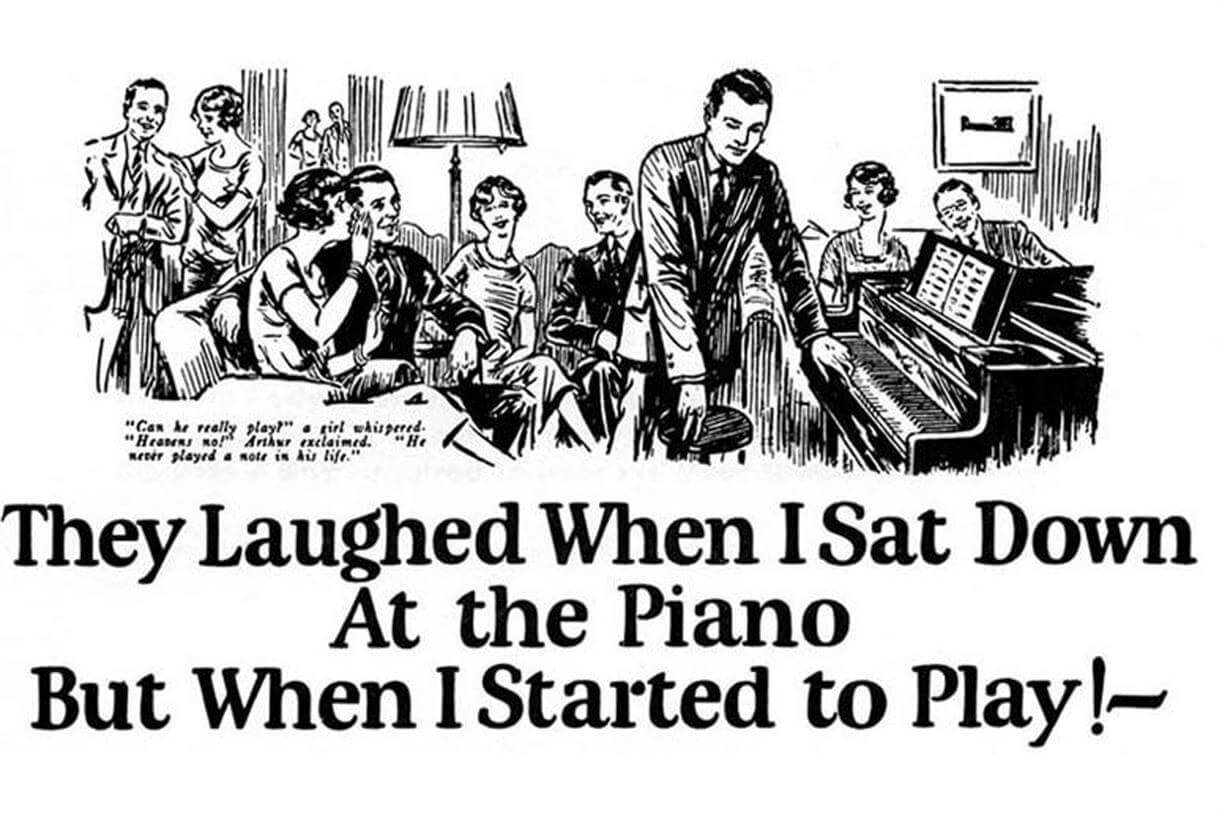 This classic ad by copywriting pro John Caples ran profitably for many years, and sold truckloads of ‘how to play the piano’ courses.

The genius of this ad is that the story is built right into the headline. It starts out with a powerful negative emotion – ‘They Laughed When I Sat Down at the Piano.” That taps right into our insecurities and fears about being a failure and looking foolish.

Then Caples teases us with: ‘But When I Started to Play…’

He has created an open loop. This is a powerful tool we’ll talk about in more detail later – something that can be a real game changer. But the point is, we now have no choice but to read on and find out what happened next.

Then Caples flips to emphasizing the positive emotions that result from buying the product on offer. Our hero plays difficult piano pieces with style, feeling proud of his accomplishment, getting one up on the guys in the room. Better still, he wins the hearts of the ladies, too. All this as a result of ‘sending away’ for a course…what a deal!

2. The 97-Pound Weakling on the Beach 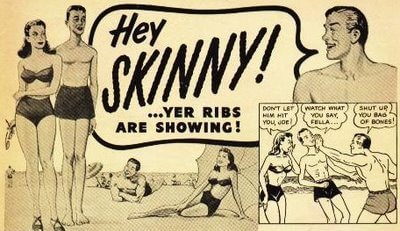 Here’s another ad that ran for many years, and sold vast quantities of product. This ad is for Charles Atlas’s bodybuilding club, and it takes storytelling to a new level. Cartoon-strip style is used to tell the story visually, pretty much guaranteeing high readership.

What average guy could fail to empathize with this story? Our hero gets humiliated by a bully in front of his lady. But thanks to Charles Atlas, he is able to beef up, get his revenge and win back the girl.

The story runs on pure adrenaline. It starts with the ‘before’ emotions – the pain of humiliation, embarrassment and insecurity about physical appearance. Then we experience the ‘after’ emotions – pride, revenge and admiration. No wonder the ad was a winner.

How much money can you make with a good story ad? Well, would $2 billion be enough for you? That’s how much this ad generated in subscription revenue for the Wall Street Journal.

The idea is not even original. The story was borrowed from another successful ad that ran decades earlier. And that, in turn, was a concept stolen from an even older ad. So it’s not about creativity – it’s all about application.

The story illustrates the difference a subscription to the Wall Street Journal can make to your career. The concept is simple, but it’s one young executives can identify with. Who wouldn’t spend a few bucks to move up from the factory floor to the executive suite?

Let’s bring things up to date by looking at the kind of offers that run today. ClickBank is a good place to start. Look at the top 10 offers on ClickBank, and you will find that nearly all of them use emotional stories to engage attention.

If you want offers to convert on cold traffic, then stories are a great way to go. Typically, these offers tell a personal story, in which the narrator experiences the kind of pain or frustration the readers/viewers are feeling.

Fortunately, our hero finds a way to solve the problem – and is now generously sharing his solution with fellow sufferers. The pattern has been used in thousands of offers, yet it’s still very hard to beat. A good story will always be a strong contender for a ‘control.’

Getting the Best Results

By now it should be clear that stories are fantastic for getting attention and making sales. So how do you optimize your storytelling to get the most sales? Here are some tips to help you.

1. Start in the Middle of the Action

Both of the classic ads we looked at above (‘They Laughed When I Sat Down at the Piano’ and ‘The 97-Pound Weakling on the Beach’) dive right into the story. There’s no preamble. We join the characters as the drama is unfolding. Our heroes are in trouble – people are laughing, the bully is poking fun.

You may notice that this blog post also starts with a story, and we dive right into the middle of the action.

Remember that conflict is what makes stories interesting. We watch soap operas to find out what happens next. The more dramatic the story – and the bigger the conflict – the greater the desire to stay with the action.

Now let’s look at another powerful tool used in soap operas and TV series of all kinds – open loops. You know how this works:

Our hero is hanging from a cliff, clinging on for dear life. It seems certain he will fall to his death at any moment. To find out what happens next, tune in next week – same time, same channel…

This is a classic ‘cliff-hanger’ episode ending. The writers have left an ‘open loop.’ The only way to close the loop is to tune in next week and watch the resolution of the story.

Oh, and by the way – did you notice the ‘open loop’ I created earlier, when we were talking about John Caples?

‘He has created an open loop. This is a powerful tool we’ll talk about in more detail later.’

You’re still here, so I guess it worked…

Getting the attention of your audience is one thing. Holding it is something else. Open loops allow you to keep people glued to your sales funnel all the way from the ad to the checkout page.

So now you know why stories are so powerful, and you’ve seen how to execute them efficiently in advertising. Now it’s your turn. You have an opportunity to write your own story – one in which a single story-led campaign generates millions of dollars and ensures a comfortable retirement.

So what are you waiting for? Time to dive in, right in the middle of the action…

Discover how to deploy a secret weapon and scale your offers to the moon. Pick a time to talk and let's start making money together.